By: Cuba Archive* *The following is an abridged version of "The Forgotten Victims of Che Guevara, 2nd edition," by Maria C. Werlau (soon available in Amazon in English and Spanish).
Por

Ernesto Guevara, better known as “Che,” is the ultimate poster boy of “revolutionary chic,” a quintessential icon of mass culture. Ironically, most devotees of the Che cult know little, if anything, about him –what he stood for, what he did, and the consequences of his violent quest. Yet, there is an irreconcilable dark truth behind the carefully-constructed myth of Che Guevara. A cursory look at the extensive bibliography on Che, including his own writings, or a glance at the list of his known victims makes that patently clear. 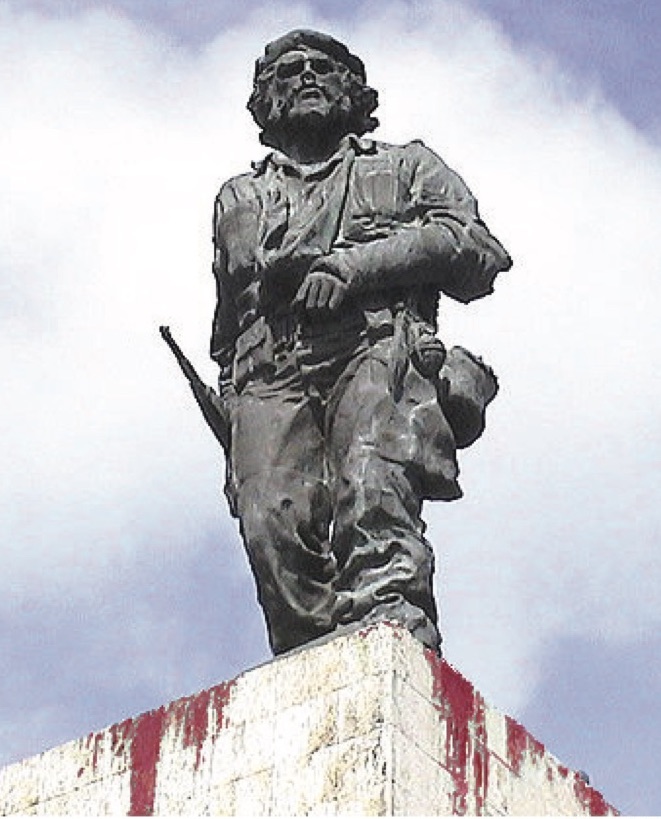 Guevara’s face adorns t-shirts of many opponents of capital punishment, but the flesh and blood “Che” exhibited a deep contempt for the sanctity of human life. He knew from his communist self-education that terror would be a necessary component of revolutionary order. Besides, he had come prepared for the task of executioner; in the Sierra Maestra had been forged as a serial killer. Of the 25 executions by the Rebel Army during the fight against Batista that Cuba Archive has documented, at least 6 were by the hand of Che or ordered by him. Later, from day one of the new revolutionary government, January 1, 1959, he and the Castro brothers set out to take control in Cuba by sheer terror through mass killings.

The death penalty was practically abolished in Cuba, as article 25 of the 1940 Constitution forbade its application except in cases of military treason. But the new Council of Revolutionary Ministers modified the constitution, ignoring the clauses on its amendment, and passed laws on January 10 and February 10 of 1959 that subordinated –and essentially abolished– the constitution, granting the death penalty a vestige of legality and allowed its retroactive application.

Executions took place all over Cuba directed by the Castro brothers and other rebel commanders. From January 1 to 3, 1959, Che executed, or left orders to execute, 25 people in Santa Clara. On January 3, Fidel Castro appointed him commander of La Cabaña prison in Havana and supreme judge of the revolutionary tribunals. In the few months Che was in charge of La Cabaña (from January 4 to November 26, 1959), 73 people are believed to have been executed without basic legal guarantees; the vast majority was killed immediately after kangaroo summary trials that often lasted minutes and presented no evidence of the alleged crimes of the accused. Che not only commanded La Cabaña, but was also the judge in charge of all appeals. After he left to assume the presidency of Cuba’s Central Bank, he reportedly continued to sign La Cabaña’s execution orders.

The idea was to kill as many as possible who had worn a police or military uniform under the Batista regime, to set the tone of what was to come. Not surprisingly, it appears that most of Batista’s true goons had taken flight immediately or managed to escape. In any event, the Castro regime has never managed to produce any evidence of Batista’s so-called 20,000 victims and, in fact, Cuba Archive has not been able to document more than 700, several hundred of which are just reports in non-verifiable lists.

Curiously, the famous biographies of Che Guevara (including Jon Lee Anderson’s and Jorge Castañeda’s) have devoted hundreds of pages to the smallest minutia of his life, but given almost zero attention to his victims. In fact, Che’s clothes, appearance, interests, sexuality, or personal correspondence receive more interest than those whose lives he stole or of their loved ones left in blistering agony.

Che spoke frankly to the international community about the revolutionary government’s killings in Cuba. At the United Nations in New York on December 11, 1964, he made his famous statement: “”Fusilamientos” (executions by firing squad), yes, we have executed, we execute, and will continue executing while necessary.” What is less legendary, perhaps more shocking, is that he was in favor of unleashing nuclear war to “build a better world,” supposedly from the ashes, during the Missile Crisis of October 1962. A few weeks later, he told a British journalist that if the missiles had been under Cuban control, they would have launched them. If there was any doubt about his objectives, his 1967 message to the Tricontinental Conference (of the Organization of Solidarity of the Peoples of Africa, Asia and Latin America) passionately advocates the destruction of the United States.

The actual number of Che’s victims may never be known. In fact, Cuba Archive has recently learned of four more executions ordered by Che in Camagüey in or around September 1958, during his command of a Rebel Army column. The victims’ names are unknown, two were members or cohorts (perhaps guides) of Che´s troop –Guevara had both killed on the spot, one for taking a cigarette from another member of the troop, the other one for serving himself a plate of food before Guevara ate. He also ordered two young brothers who worked at a rice farm killed over rumors they had snitched on anti-Batista saboteurs. (The untold story of this injustice will be released soon.)

Apart from those Che may have killed in Cuba and remain unknown, many more people died in the guerrilla wars he led in the Congo and Bolivia or in other violent actions he led in Latin America. After his death, the totalitarian system he helped design and impose in Cuba has cost thousands of lives and the communist model of his devotion has left a death toll estimated at one hundred million.

In the age of mass killers who massacre civilians for their fanatical convictions, understanding who Che Guevara was seems imperative. At the very least, we owe remembrance to his victims and solidarity to their loved ones left behind. They were not only immersed in pain ignored –even despised by the world– deepened by the exaltation of the executioner.

Domingo Álvarez Martínez, age 39, was executed by firing squad on January 4, 1959 in Santa Clara. Member of the Armed Forces of Cuba working for the Military Intelligence Service (SIM). Che signed his death sentence before leaving for Havana, for alleged war crimes. He was executed without a trial in the presence of his 17 year-old son.

Miguel Ares Polo, age 27, was executed by firing squad at La Cabaña Fortress Prison on February 6, 1959. Member of the National Police Force, he had been a policeman for just 2–3 months before the
triumph of the revolution. He was sentenced to death on what he insisted were fabricated charges and reported never having even seen the witnesses brought forth at his trial.

Jesús Carrera Zayas, age 27, was executed by firing squad March 11, 1961 at La Cabaña Fortress prison. Member of the revolutionary Armed Forces and former Rebel Army Commander of the Second Escambray Front (during the anti-Batista struggle). He was sentenced to death for conspiracy, for supplying arms to the anti-Castro Escambray rebels. Carrerra had been staunchly opposed to Guevara’s Communist ideals and had several forceful arguments with him during the fight against Batista and after the revolutionary goverment came to power. As a result, Che held a grudge against him; reportedly, he ordered his death and attended execution.

José Castaño Quevedo, age 44, was executed by firing squad at La Cabaña Fortress Prison on March 7, 1959. Castaño was a First Lieutenant of SIM, Military Intelligence Service, and a renowned international expert in criminology and communism. As Deputy Chief of the Bureau of Repression of Communist Activities (BRAC), he had been head of research and investigations. Charged with “murder, abuses, torture, rape and theft” by a revolutionary tribunal at La Cabaña, he was sentenced to death after a summary trial where no evidence of the alleged crimes was presented and witnesses had been instructed to lie. The head of La Cabaña’s tribunals requested the case to be tried again on grounds of insufficient evidence. Fidel Castro agreed, but bowed to Che, who wanted Castaño killed. Che took possession of all the BRAC’s files and it was rumored he had them burnt.

Raúl Clausell Gato, age 33, was executed by firing squad at La Cabaña Fortress Prison on March 15, 1959. Clausell was a Sergeant in the National Police Force who came from a long line of career police officers. He was arrested, taken to La Cabaña prison and tried. His wife and sister witnessed how a group of men was instructed on what to testify at the trial and when one designated witness brought forth and asked “Who is Clausell?” had pointed to someone else. Two cousins were also executed at La Cabaña: Police sergeant Angel Maria Clausell García, age 35, was sentenced to 30 years in prison (his family claims on false charges), but the night before his scheduled transfer to Isla de Pinos prison, on April 29, 1959, he was taken from his cell and executed without explanation. Policeman Demetrio Clausell González, age 21, was executed February 1, 1959, charged with having gunned down a member of the 26th of July movement.

Fidel Díaz Merquías, around 50 years old, was executed by firing squad at La Cabaña Fortress Prison on April 9, 1959. Díaz was a career member of the military working as an Assistant in the Military Intelligence Service (SIM) for the area of Bauta, province of Havana. Believing he had committed no crimes, he had seen no need to hide or leave the country, but was soon arrested and accused of murdering a resistance member whose body had been found near Mariel, where his family was from. At La Cabaña prison, he was tried and sentenced to 25 years. One day, unexpectedly, the family got the news that Díaz had been executed.

Ariel Lima Lago, age 19, was executed at La Cabaña Fortress Prison on February 18, 1959. When Ariel was only 17 years old, he had joined the anti-Batista resistance 26th of July movement. In mid-1958, he was captured and, after seeing evidence of communist infiltration, started to collaborate with police. Immediately after the new revolutionary government took over, his arrest was ordered and Ariel was captured trying to flee Cuba by boat. Sent to La Cabaña prison, a revolutionary tribunal sentenced him to death. The priest at La Cabaña pled on his behalf with Che Guevara, citing his young age. But, Che ratified the sentence. However, as Ariel awaited his execution, Che told his mother that his life would be spared. Early the next morning, the family was stunned to see the newspaper prominently reporting Ariel’s execution.

Rafael García Muñiz, age 23: Executed by firing squad at La Cabaña Fortress prison on March 18, 1959. García had been a policeman for just six months when the revolutionary government came to power. Finding no reason to hide, he reported for duty to the new revolutionary authorities.  He was arrested on the spot, sent to La Cabaña prison and accused of murdering three members of the 26 of July movement. When Che was told about his innocence, he explained he had to die “for having worn Batista’s blue uniform.” At his trial, García was absolved for lack of evidence, but quickly sentenced to death in a second trial. Che promptly ratified the sentence and had him executed immediately, without allowing farewells with his family.

Cornelio Rojas Fernández, age 59, was executed by firing squad in Santa Clara on January 7, 1959. Lieutenant Colonel Rojas was Chief of Police of Santa Clara and was immediately arrested January 1st 1959. The family did not know his whereabouts. On January 7th, 1959 and without warning, television programming was interrupted to transmit his execution. It was the first of many executions that would be televised to the nation. Che Guevara had ordered Rojas’ death before leaving Santa Clara to take command of La Cabaña in Havana. There had not been a trial and his family has never known of any specific charges brought against Rojas.

Published by Cuba Archive on October 2017

*The opinions published herein are the sole responsibility of its author.*